It’s been nearly a year since Ninnemann Enterprise, Inc. added two Lely Astronaut A5 robotic milking systems in their retrofit barn. And, according to Aaron Ninnemann, there isn’t much the family would change. Aaron operates the dairy and cash crop operation with his father, uncle and two brothers in central Wisconsin.

“It has worked well for us, and we would do it the same if we had to do it again,” Aaron said. The family milks about 124 cows and farms 1,900 acres. However, they are a little different than many dairies because they buy all their replacement heifers. All they have on-site are milk cows and dry cows. 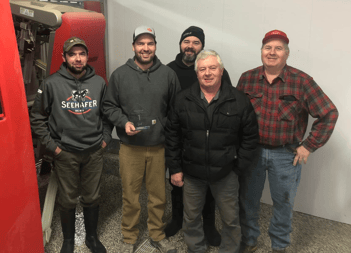 The farm and dairy have been in the family for several generations. Aaron’s grandparents purchased the farm from his great-grandparents in 1957. They were milking 18 cows at the time, but they quickly doubled the herd to 36 cows. Through the ‘60s and ‘70s they kept growing the herd. In 1975, they got to about 100 cows and they have stayed around that same size since.

Aaron’s father and uncle have run the dairy most recently.

“They have been milking cows in the stall barn since they were 12 years old,” Aaron said. “They were still handling most of the milking responsibilities even up until the robots were added.”

As his father and uncle reached their mid-to-late 60s, they could tell they didn’t want to manage a dairy forever.

“Although my dad and uncle were ready for a change, we weren’t ready to be completely done with the dairy.”

Dairy robots were not completely new to the Ninnemanns.

About seven years ago, they visited a dairy open house with robots made by a different company.

“We were excited to watch the robots,” Aaron said. “A perfectly uddered 2-year-old heifer came in and, as we watched, the robot was unable to completely attach to her. It milked three of the four quarters and she left the robot.”

When his dad saw that robot fail, that was the end of the discussion for a while. The family did not believe the technology was ready.

But Aaron said he and his brother kept hoping and thinking that someday that would change.

After an area technical college added a Lely Astronaut A3 robotic milking system, Aaron’s father went and watched the robot for several hours one day. It never missed a cow. The technology hurdle had been cleared, but the family still wasn’t ready financially. However, they knew if they ever added robots, they would be red.

Finally, as his father and uncle looked to the future, they realized they only wanted to milk for about three more years.

So, Aaron Googled “nearest Lely dealer,” which led him to Seehafer Refrigeration and started a discussion about whether Lely robots would be an option.

“I told John Seehafer our story – that we need to use as much of this current barn as possible because we want to save our manure pit and silos. We did not want to build a new facility,” Aaron said.

John Seehafer arranged for Aaron and his family to visit a nearby farm that had one Lely robot in a tie-stall barn retrofit.

“My brother and I visited that farm on a Friday,” Aaron said. “Our family went back to that same dairy the next day and within a month, we had signed the paperwork to purchase two Lely Astronaut A5 robotic milking systems.” 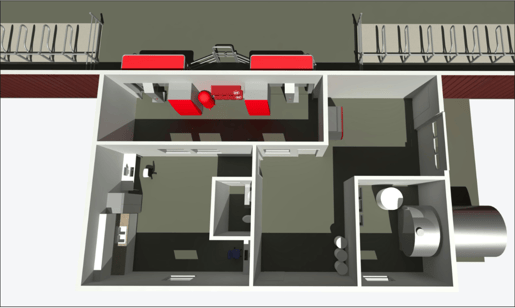 Installation was different for this family since they don’t raise heifer calves.

“We completely sold our herd, shut down for three months, retrofitted the barn, got everything done and then bought a new herd for startup,” Aaron said.

When they were ready for startup, they tried to purchase cows that were used to robots but struggled to find any. They purchased 70 cows from an existing parlor dairy and bought more cows at a livestock auction a few days later.

“It worked well for us, and we would do it the same again,” Aaron said.

Within two weeks, the cows were adapting to the robots.

“Previously, we had Holsteins. When we restarted, we had quite a mixed herd,” Aaron said. “In the beginning the herd was running an average of 55-60 lbs. of milk per cow with a 340 somatic cell count (SCC). Our first SCC reading came in at 340 for day one, but we got that under control. Now we average about 130 to 140 SCC.”

It took time to get the cows’ production numbers up.

Everyone in the family is very happy with the robots and would never go back.

“In the past, when we were busy with fieldwork, it required three to four of us to stop in the fields to go milk,” he said. “Now we only need one person with the cows and everyone else can stay in the field.”

Ninnemanns are the first Seehafer customers to use the Lely Horizon farm management system, which combines individual cow data from Lely equipment with third-party information into one single app. In addition, they have a Lely Juno automatic feed pusher.

“The Juno is great,” Aaron said. “I wish we could do a Lely Vector automatic feeding system but that isn’t possible with our barn set up.”

In addition, they installed a Lely Walkway automated hoof bath.

“We run it every day,” Aaron said. “We only have a one-lane barn, so that footbath is an easy option for us every day. As a result, we have nearly zero hoof issues.”

Aaron said his grandparents were able to see many of the barn improvements completed, but unfortunately did not get to see robots up and running.

“They worked very hard to establish the dairy,” Aaron said. “The robots allow us to carry on their legacy.”