For Kate Steensma, the Scandinavian cheese known as ‘Skyr’ (pronounced ‘skeer’) is part of a dairy heritage stretching back four generations. The farm she runs with her family recently installed Lely Astronaut A5 robotic milking systems, allowing her to dedicate more time to further diversifying the farm’s offerings.

The Steensma family is descended from a lineage of Dutch Hollander dairy farmers. Kate’s great-grandparents immigrated to Iowa in 1926, moving to Washington state two decades later in 1946. After quickly outgrowing the farm they had leased there, the Steensmas purchased a new facility five miles down the road, physically walking their 15 cows there to begin milking. This is the same location they still farm today. 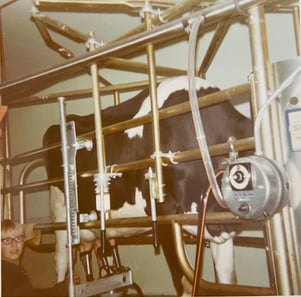 Keeping up with the times

In 1969 the family’s tie stall barn fell victim to fire, eliminating their entire herd and tractor in the process. Kate’s father John was 11 when it happened. Their community came together to help them rebuild and in 1970 they were back in operation with a five stall, side opener parlor.

John Steensma took over day-to-day operations in the early 1980’s and in ’88 retrofitted the barn to a double-8 herringbone design. This seemed like a massive expansion for only 100 cows, but John was thinking about the future.

In the early 2000s the decision was made to further expand operations and the milking parlor was expanded to a double-12 herringbone layout and 200 head of cattle. In 2022 a retrofit of space that once housed upright silos allowed new capacity to install three Lely Astronaut A5 robotic milking systems, Lely Juno automatic feed pusher, Lely Grazeway selection box and put 100% of their herd on robotic milking. 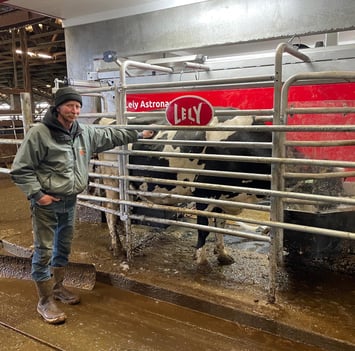 When making the decision to move to robotic milking, Kate Steensma said, “It’s about our relationship with our local dealership. We had a really good team here who we had a history with and wanted to keep working with. It’s really about finding the right people to work with.”

The team at DariTech out of Lynden, WA worked with Kate and her family to design the ideal layout for the new robotic systems.

“We’d stand in the barn and envision where everything would go,” said Steensma.

The installation and start-up processes were also smooth.

“The most important part was the feed training. We just fed the cows in the robot for a good week or more before we milked them. The animals acclimate to the system and know it’s a positive experience,” explained Steensma.

A future driven by data and cheese

Discussing how her farm has benefitted from the wealth of data generated by the robots, Kate said, “I love the data. I always think of it as being useful because you’re managing by exception instead of waiting for a problem to get so big that you actually see the cow suffering, or you see the whole herd dipping in production or have a somatic cell problem. You are getting those alerts on a fine level and instead of going through every item on every cow, you can use the filters and filter out the worst offenders on these metrics and then either treat them, separate their milk or separate the animal itself if she’s needing special attention. That’s huge. We’re able to more quickly get to the work that needs to be done and get ahead of it and be more proactive about managing issues before they become chronic.”

Efficiencies like these allow Kate to devote more attention to diversifying the farm’s dairy product portfolio. Their flagship product is ‘Skyr’ an Icelandic style cheese that is eaten much like a yogurt.

“When I was eight or nine my dad taught me how to make yogurt. I did my market research and found that especially in the northwest, an Icelandic style Skyr was a growing category in dairy. But nobody in this region was producing it. A lot of dairies who make a niche product will jump on their own heritage. Some will use a family recipe that’s been passed down. We aren’t Icelandic, but we’re a little Norwegian and they produce a lot of Skyr,” said Kate.

Heritage and family are important to her as well, “I want our farm to stay small and stay in the family,” she said.