Lancaster Farming published an article on feeding cow by vector robots by Charlene M. Shupp which features Galen Nolt and his family who operate Westview Farm in Peach Bottom, PA. 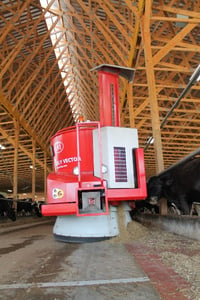 A year ago the Nolt family broke ground on a new dairy barn with Lely A4 Astronaut milking systems. That was followed by the addition of a Lely Vector automated feeding system. The 325-acre farm has 190 milk cows and 60 heifers, as well as a 3,000-hog finishing operation and 20,000 brown laying hens.

Below is an excerpt of the article.

Galen Nolt’s children are a part of the farm team. Darwin and Michael work full time, and Jennifer and Sherlyn are part-time employees.

The robotic milking system went online in March and has three A4 milking robots. Later in the spring, the Nolts started using the Vector feeding system. The Nolts are the first family in the United States to install the Vector system, although several have been installed in Canada.

With the new barn, Nolt realized he would have to update his feed room. After pricing a conveyor-belt feeding system, he decided it would be worth considering the Vector and — traveling with Amos Fisher from Fisher and Thompson — visited a farm in Canada that was using the system.

Nolt said he was sold. “I texted the boys and said this is it,” he said. “I was really impressed.”

The Vector works independently and can feed cows 24 hours a day. Nolt said he has stopped by the barn at 2 a.m. and found the Vector feeding the cows. He said he was amazed to see that the cows were up and eating.

What he likes best about the system, Nolt said, is its consistency. Vector feeds the cows based on their needs. For example, on the day of the tour, the summer heat had broken and the cows were eating more.

A robot adapts to circumstances, eliminating feed waste, whereas an employee would likely feed the same ration at the same times each day.

Read the entire article that appeared in Lancaster Farming.