Fourth generation dairy farmers Brian Houin and Matt Houin joined the family business at Homestead Dairy in 2003 and 2009, respectively. Together with their family and other staff, the Houins now operate the largest robotic dairy operation in North America with 36 robots currently milking their cows. 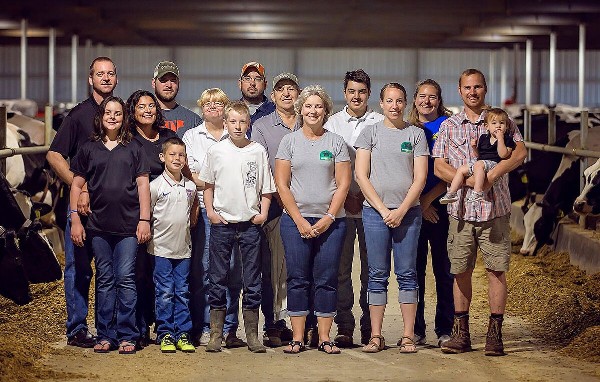 A few years ago, the Houins were exploring the possibility of a new rotary dairy when a friend suggested they should look into robots. What first seemed to be a far-fetched idea soon turned into reality as the Houins began weighing the benefits milking robots offered, such as managing the effects of rising costs of labor, increased production, better reproduction and improved cow health.

The turning point came when they were touring nearby robotic dairies. Brian noted that the behavior of the cows in robotic barns was drastically different and attributed it to the way the robots cater to cow comfort and health. For the Houins, choosing a robotic barn allowed them to grow into the barn in phases with the first six robots starting in February of 2017 and the last robots of their 36 starting in December of 2017.

“We knew going in we didn’t want to buy outside cattle,” Brian said. “With the genetics and our management, we wanted to grow internally. Going with robots and doing it one step at a time allowed us to fill it with our own cattle.”

The initial design for their robots was similar to the rotary design with three natural-vent barns and the robots on the outside. After working with Big Box Dairy and their Lely team, they worked out a design that melded together a lot of different ideas and ultimately met the goals and needs of the Houin family.

With their chosen barn design, it was discovered that two-robot pens would stretch too far from the milking center. Deciding that there wasn't a big enough difference when finding a cow in a pen of 180 instead of 120 to convince them to re-think their design, they chose to implement three-robot pens in an in-line orientation.

One of the biggest reasons behind the three-in-a-row layout was to have all the robots be the same. That way, if a cow is trained on one robot, she won't have to be re-trained if she is moved to a different robot. Another factor they considered was the ease of having six robots in one robot room for maintenance and keeping things clean. The concern behind the thought that the cows may not sort with the three-in-a-row was quickly laid to rest as the Houins observed how easily the cows took to moving gates by themselves.

The 380,000 square-foot facility was completed in May 2017 and housed 24 Lely Astronaut A4 robotic milking systems. The layout of the land also allowed for Homestead dairy to put in an underground system that houses all the milk lines, mechanical airlines and electrical wiring. Today, 36 robots are milking cows in this structure with all the milk being sent to one milk house. Built for the future, Homestead Dairy is able to add more robots while avoiding the extra cost of multiple milk houses by sending that additional production to the one milk house as well.

"What makes the design the most beneficial is that we are permitted to add a third onto the barn in the future if we choose to," said Brian. "Having all the main lines in that subway system makes it very efficient and very cost-effective to do the addition onto the barn."

Lely North America knows that every dairy producer is different and has different needs, which is why there is no one-size-fits-all barn layout. Each design is created with the producer's goals and needs in mind and is only created after extensive conversations with the producer.

Want to know more about the Homstead Dairy journey to Lely Life? Listen to the Dairy Robot Radio Podcast Episode 5 as Brian Houin speaks with Lely’s Dairy XL Development Manager, Preston Vincent, about the factors that influenced the decisions they made prior to their first startup and the takeaways they have learned since. Brian also discusses the differences he has seen in herd behavior, health, reproduction, production, genetics and more.