When a fire damaged a barn at Enterprises Louis Balcaen, Inc., Farms in 2019, Lely automation seemed like the perfect way to get dairy operators back on their feet.

“We were thrilled with them,” herdsman/manager Michael De Jong said of his first four milking robots. “We decided to invest fully in robotics and haven’t looked back.” 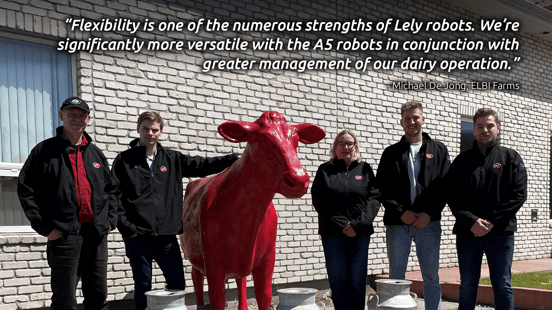 Making the Switch to Lely

Michael’s parents, Peter and Astrid De Jong, immigrated from the Netherlands in 1997, starting out with a 55 tie-stall barn. In 2002, the De Jongs purchased Enterprise Louis Balcaen Inc., also known as ELBI, greatly expanding the herd.

Michael operates ELBI Farms with his parents, Peter and Astrid, and two brothers, John-Peter and Alex. They oversee a herd of about 900 milking cows, making the operation one of the largest automated dairy farms in Manitoba.

Michael, who grew up on the farm, represents the second generation of farmers in the De Jong family. He said he was eager to explore the potential of the robots’ capabilities and – hopefully – lighten his family’s own considerable workload.

“It’s not as much physical work anymore,” Michael said. "The work environment has completely changed and employees have responded well."

“Flexibility is one of the numerous strengths of Lely robots,” Michael said. “We’re significantly more versatile with the A5 robots in conjunction with greater management of our dairy operation.”

The first robots were installed in a retrofitted barn shortly after the fire. Installation of the other machines began in February 2021 and wrapped up in June of that year. “We decided to utilize automation in our everyday tasks,” he said. “Simply put, We love the robots.”

The benefits of the automated dairy equipment were established early and often. Michael said the milking cows quickly showed an seven- to eight-liter increase in milk production after moving from the conventional rotary parlor, while at the same time reducing SCC from 183,000 to 88,000.

The Lely Discovery Collectors have been especially lucrative. The machines help keep barns free of manure build-up, which can damage cows’ hooves over time. Paired with the Lely Walkway foot baths, the herd is standing strong.

“We saw right away better hoof health,” Michael said. “We have seen a 52% decrease in hoof costs in a year’s time since putting these collectors in.”

The Lely Calm automatic calf feeders have also been a boon to the farm’s youngest livestock.

“Calves are happier, healthier and they grow faster,” Michael said. “Milk consumption in some cases has doubled since they went on the calf feeder.”

All the Lely products have proven their worth, Michael said.

“We decided to switch everything to robots,” he said. “We love the robots.”

Michael also praised his local Lely Center, Penner Farm Services, for helping guide the family through the transition to automation and continuing to provide support. 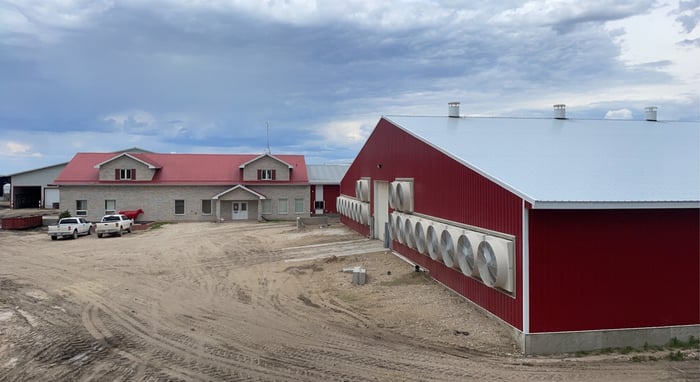