Five years ago John Harrison of Sweetwater Valley Farm didn’t believe robotic solutions could work at the scale his operation required. Today he operates Tennessee’s largest robotic dairy facility and was awarded “Tennessee Farmer of the Year” at the 2022 Swisher Sunbelt Ag Expo.

John and Celia Harrison purchased an interest in Sweetwater Valley Farm in 1987 and became the sole owners in 1992. The operation has continued to grow, now producing milk, cheese, a variety of grains and silage and has positioned itself as a popular agritourism destination. 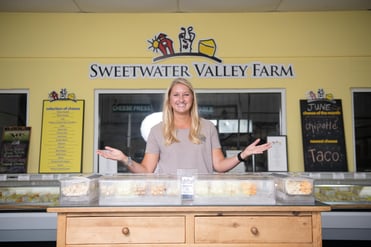 Working out of a sand-bedded tunnel ventilation barn, Sweetwater Valley Farm was producing more than 6,000 pounds of milk per robot per day in just the first six months after commissioning eight robots. Amazing management, high-quality genetics and thorough monitoring of robotic key performance indicators has allowed the cows to excel in this high-producing herd. 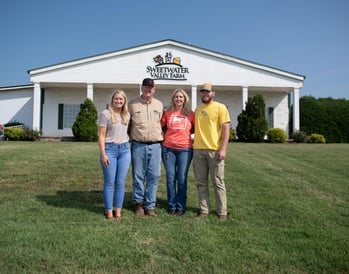 The impressive results produced by Harrison and his team caught the attention of more than just their satisfied customers. His farm was one of four nominated by a group of industry professionals from the University of Tennessee Extension Service based on criteria including production metrics, community impact, business growth and more. Final judging was overseen by the Swisher Sunbelt team who awarded Harrison and Sweetwater Valley Farm the honor of “Tennessee Farmer of the Year”.

Asked if he expected to win, Harrison was quick to lift up his peers, saying “They’d all be great candidates. We knew we had tough competition but we knew we were a good possibility to win.” The excitement of the competition was capped by an award ceremony attended by members of the ag industry, university staff and leaders, Department of Agriculture staff, Farm Bureau officials from nine southern states, even the Governor of Georgia and his Secretary of State. “I thought I was in a beauty pageant!” says Harrison of the experience where he was presented with a $2500 cash prize. Remarkably humble, he says the award simply means “A job well done. Keep up the good work.”

Five years after bringing their first Lely robots online Sweetwater Valley Farm is in the process of a generational transition to being run by Harrison’s son. Working with Lely and incorporating robots into the plan has been a consideration all along, especially for the wealth of valuable data offered as a result. “We made the commitment,” says Harrison. “Things are really changing fast. Faster and faster, and technology is a huge part of that change. I’m going to rely on the younger generation. They’re quick to use this stuff.”

To learn more about data driven farm management with Lely, click below: