The Ahlem family of Countyline, LLC chose Lely automation for the future of their large Jersey herd, and the dairy has become progressively more robotic since July of 2021. Upon completion, Countyline, LLC will be the largest robotic dairy in California with 32 Lely Astronaut A5 robotic milking systems milking 2,150 cows. Continue reading to learn more about this historic project.

Vance Ahlem is a fourth-generation dairy farmer who currently runs Countyline, LLC with his wife, Ashley, and his parents, Jim and Carol. The family has been at their current facility in Denair, California, since 2008. The operation's four free-stall barns were originally outfitted with 32 Boumatic milking robots that had been removed by the time the Ahlems purchased the farm and their team milked with a double 32 parallel parlor for over 10 years.

When considering the big picture of the Californian labor market, the dairy's team knew they needed to take a new direction. Part of Vance's research involved visiting the Lely Campus in Maasluis, the Netherlands.

"We spent the day at Lely's headquarters with Mr. van der Lely and visited Lely facilities in Denmark. Our facility is somewhat modeled after one we saw," said Vance. "It helped us to better understand what Lely is about and their free flow design. We were going with guided flow originally but seeing the robots in action convinced us free flow was the way to go."

Not only did this visit persuade Vance to go fully robotic, herds manager Laurenio Vitorino and the rest of his team were also all on board with the idea. The expertise and committed support of their local Lely Center TDR, Inc. was also a big part of their decision.

"I liked Lely's commitment to robotics and the support from both Lely and TDR," Vance said. "We've worked with TDR in the past and they've provided tremendous help with their FMS Advisor who works on T4C and helps us understand what we need to get the job done."

With the support of their local Lely Center and the Lely Dairy XL team, the Countyline, LLC team chose to incrementally make the transition to robotic milking in several separate waves. Retrofitting the barns for robots made this gradual, year-long transition ideal for the large operation due to the fact that their facility was originally built for robots.

On July 12, 2021, the first eight Lely Astronaut A5s were started up at the large operation. Since this first wave, the team has brought four more robots online every two months and the dairy is currently milking 1,500 cows with 24 milking robots. The staff is able to remove cows into a separate pen, install four robots and then put the cows back once construction is completed. The Lely Astronaut A5s are arranged in a head-to-tail configuration with four robots in each pen: two right hand and two left hand robots.

With several startups already under their belt, the Countyline, LLC team has the process down to a science.

"With the groups of four we could pretrain them in the robots for a week," said Vance. "We have our in-house crew do startup and we usually have the gates pulled on Wednesday or Thursday if we start on Monday, then we go into fetching mode."

The Countyline, LLC team is also taking advantage of the data the Lely Astronaut A5s provide. They're paying close attention to energy corrected milk and the health reports to identify issues in a subclinical situation. The staff is able to establish cull lists based on how each individual cow is performing and not cull cows similar to what they typically would have prior to robots. They are also able to track each cows' activity with the collars.

Even though the operation is cutting its herd down from 2,500 to 2,150 cows with this transition, Vance believes the robots will increase their overall production.

"We have seen milk production hold. I'm expecting it to go up. Most people tell me it drops in the first six months but we have not seen that," Vance said. "I believe we're going to more than make up for milk production when cutting our herd."

The Jersey herd is currently averaging 57 lbs for first lactation cows, 78 lbs for the second lactation animals and 64 lbs for the composite herd. The herd is also averaging 3.64% protein and 5.23% fat. The operation needed 24 hired employees before Lely automation and will have those labor requirements cut in half when the project is completed. The Ahlems have plans to maintain separate managers and teams to take care of the large automated barns. They're even considering the possibility of creating some friendly competition between the facilities to enhance performance.

Vance advises other dairy producers who are considering robots to have their entire team on board and make sure to get their banker involved early on.

"Trust the process and support you get from Lely. It's a whole new way of managing people and animals," Vance said. "Reach out to those who have robots and don't be afraid to go visit. I visited Postma Dairy often and just sat and watched to try to fully understand how it works."

The Ahlems are excited about how far they've come with Lely automation and look forward to what's ahead. Vance admitted that they're still learning a lot about how to push the robots and themselves with this new milking process. The operation will eventually add eight Lely Juno automatic feed pushers to cut hours spent on manual feed pushing.

Vance is a firm believer that milking with robots is possible on a large scale, especially with how producers can continue to add on more machines over time.

"They're scalable. The thought that you can't run a large dairy with robots is quickly going to be put to rest, especially with the labor environment in California," said Vance.

The team at Lely North America is excited to see Countyline, LLC become more and more robotic with the help of Lely automation and can't wait to see the completion of this large project! 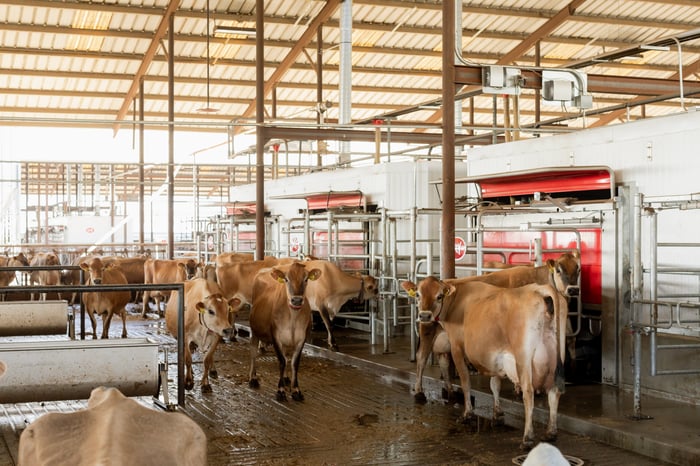