You could say that Fatso the cow saved the family dairy farm at Circle T Dairy, our second stop on our farm tour. Located in Cache Valley in Trenton, Utah, minutes from Logan, three generations — patriarch Glade Griffin, his son Tom, son-in-law Darrell Eagn and grandson Trevor Eagn — are involved in the family business. 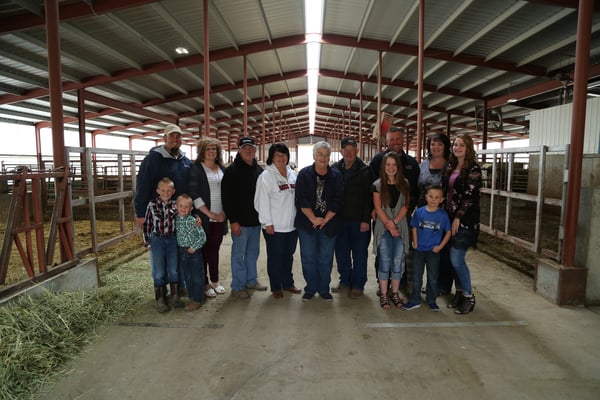 So how did Fatso save the farm? Well, here’s the story. Back when Glade, who is now 77, was a young man, his dad suffered a heart attack and had to sell his cows. With a desire to keep the dairy going, Glade kept one cow, Fatso, took a job in Logan making cabinets and continued to build the herd.

So ok, maybe it wasn’t Fatso who saved the farm, but Glade. At least that’s how his family sees it.

“He started this place. Bought it from his dad, but there was basically nothing here,” said Tom. “He started up and ran with it and built this place up, and it's because of him that we have this opportunity to have this and he has set us up for success. He's still here.”

No matter who the hero of Circle T Dairy is, the operation is poised for the next generation, should either Tom or Trevor’s kids decide to follow in their father and grandfather’s footsteps. If you ask five-year old Bo, who comes to work with his dad Trevor when he’s not in school, he’s going to be a dairy farmer when he gets older. Glade’s not surprised, though as he says it’s in their blood.

Plus, there’s the robots. Gone are the days of back-breaking work spending five-plus hours milking in a flat barn. Now it’s the two Lely Astronaut A4 automated milking systems that keep the cows milked and a Lely Juno automatic feed pusher that keeps feed fresh and accessible. As Tom notes, they went from “the Flintstones to the Jetsons.”

Initially, when Tom brought the idea of automated milking to his family, they were skeptical. In fact, Glade, Darrell and Trevor all thought he was crazy. They said it wouldn’t work. Tom had the vision, however, and convinced Trevor to go with him on a trip to Canada to see a barn with milking robots in action. Once Trevor saw them and asked a few questions, he became a believer.

“I knew it could work,” said Trevor. “Honestly, I was worried about the technology. After seeing them and talking with other dairy farmers, I could see it would work. And now, it’s so amazing because they’re so easy to take care of, so easy to figure out what’s going on.”

The family appreciates all the benefits of automation – more milk, a quieter, more comfortable herd and better reproduction, just to name a few – but find the real value to be in the extra time they are able to spend with their families. Now, they have time to go to games and school functions and they can spend time as a family and go on vacation.

“That’s what is important,” says Darrell. “Family is what this farm is all about. It means everything.”