*Published on July 31, 2017 in Progressive Dairyman. Jim Elliott is the Assistant Regional Manager for Lely. 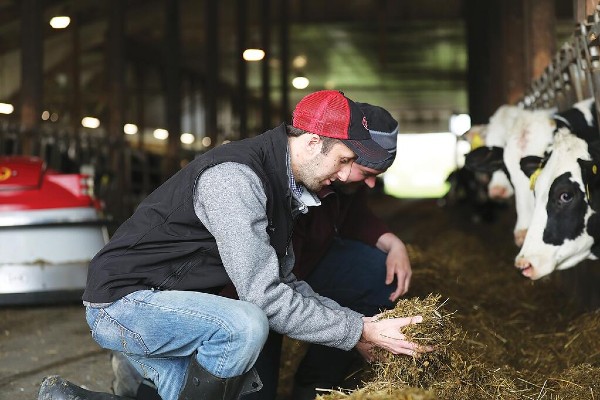 The ease and accuracy of the new technology, coupled with the rising labour costs in New York, were some of the reasons the Murrocks decided to update their robotic milking systems last year.

Darryl Murrock, who farms with his sons, Dillon and Jeffery, near Watertown, New York, became an organic dairy farm in 2007 in order to meet consumer demands. Last year, he and his family began using four automated milking systems.

The Murrocks, who have about 225 cows, had been milking three times a day in a traditional parlour, where they averaged 33 kilograms of milk per cow. Since their January 2016 startup with the robots, their milk production has averaged 39 kilograms per cow.

Darryl Murrock says the quality and butterfat content of the milk has gone up since implementing the robots. He also says this system is more cow-friendly than the previous milking system.

“This system allows us to spend less time milking,” Murrock says. “In addition, the robots offer statistics on almost every aspect of milking, such as per-cow milk production, rumination, and fat and protein content of each cow. This allows better insight into what cows produce well and which cows don’t.”

Each cow has an electronic collar tag that allows the robot to identify and organize production and health records for individual animals. Collars also contain an activity monitor for heat detection and a rumination sensor for monitoring rumen function, so there is an indication of digestive system health.

There are often questions about organic dairies using grazing systems with robots. The main challenge for grazing with robots is to ensure good cow traffic, motivate cows to get milked, go out and graze, and return to the barn to be milked again.

Lely utilizes ABC grazing, which sends cows to different grazing areas (A, B or C) depending on the time of day, and a selection box to allow cows to come and go from the barn to the pastures and return to be milked.

With a free-flow traffic system, cows are regularly incentivized to use the robot through the offering of concentrates. These concentrates complement the feed they receive with the partially mixed ration at the feed fence.

The question everyone asks is: “How can cows be motivated to milk when grazing is involved?” Instead of the concentrates, access to fresh grass multiple times per day through the ABC grazing system is the positive motivation. When the motivation of a cow changes, it is important to safeguard this via the correct pasture.

The Pasture Dairy Center at Michigan State University integrates robot technology and pasture-based management. It is one of two MSU dairy farms and works to expand the research capacity of MSU.

In addition to robots, they use the Lely Grazeway selection box for steering the grazing system, according to Howard Straub III, dairy manager at the center.

Cows choose when they want to go out to pasture. The selection box then determines whether or not they are eligible based on the last time they were milked, using the same cow-recognition system used with the robot.

“When we transition back to pasture in the spring, we use the Grazeways as much as possible. While most of the cows will remember how to use the selection gates, there may be new heifers that have never used them. The more they go through them, the better,” Straub says.

He recommends transitioning the cows to pasture slowly to help the cows’ rumen microbes transition to the new feed stock.

Straub says at MSU, the first day out on grass is two hours long. The second day is four hours and so on, until the sixth day, when they are grazing half-days. Cows are retrieved from the pasture after each of these time periods end.

On day 10, set the selection box for 12-hour access, but do not go get the cows. On day 14, the selection boxes are functioning 24 hours a day (fully grazing). While this schedule can be somewhat flexible, recommendations are to take no less than 10 days to fully transition to grass.

Straub recommends introducing pasture to cows after they have been fed. This will reduce the amount of grass initially ingested and reduce instances of bloat. Cows should feed two hours before the transition grazing events in order to give them plenty of time to fill up.

As the transition continues, there will be a reduction in a partial TMR feed intake. You can reduce the amount offered to control weighbacks, but don’t short the cows on feed offered. They will reduce it on their own time.

In the fall, Straub recommends dairy producers convert cows to winter rations slowly. He recommends a minimum of four weeks when changing the cows’ forage diet to winter partial TMR or baleage, slowly increasing the percentage of intake. This will reduce the stress of a diet change on the herd.

Success factors in grazing while using a robotic milking system are: ensure good cow traffic, management of grass quality and quantity, access to pasture, outside access to water and adjust to changing conditions.

We have more easy tips for transitioning your herd to pasture.