Olson Dairy Farms is one of the newest members of the Red Cow Community and began milking with robots in March of 2020. Kurt Jr. and Krysta Olson were able to integrate Lely robots into an existing free stall barn without compromising their goal of becoming an innovative operation.

Olson Dairy Farms was founded in 1958 in Birnamwood, Wisconsin. Kurt Olson is the third generation of his family to operate the farm. Kurt and his wife Krysta run the farm with their four boys. The dairy currently has around 530 milking cows and 100 head of dry cows. The Olson family had been milking with the same parlor since 1999, however the system was starting to wear down. The team knew they needed to not only refurbish the barn, but make the next investment for sustainability. The most stressful part of managing the operation for Kurt was finding enough able hands to work on the farm.

"It got to the point where I didn't know if I could keep milking cows if we got another parlor. Labor is just too hard to find," Kurt said.

This problem ultimately drew Kurt to robotic milking. He called John Seehafer of Seehafer Refrigeration and began planning for the new design. The Olsons had been working with this Lely Center for close to 10 years, and had confidence in their expertise and service. 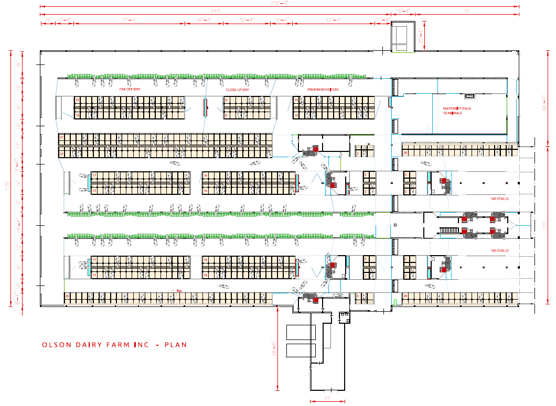 The Olsons originally considered building a completely new barn to house the robots. However, for the sake of proximity and using what they already had, they decided to remodel their original barn and build an addition. Their design is a great example of how Lely robots can be retrofitted into an existing building. Seehafer was an integral part of the designing process. As can be seen above, the robots are arranged in two separate layouts: The L-shaped and long L-shaped designs. Half of the barn contains the robots, while new sand beds were added to the original section of the building.

Olson Dairy Farms started milking with robots on March 2, 2020. The operation purchased 10 Lely Astronaut A5 robotic milking systems, and began milking 100% of their herd with all 10 robots on the first day of startup. The staff had done its homework prior to startup, with at least a week of pre-training for each cow. The first day took around 12 hours to get all of the cows through, but immediately dropped to eight hours the second time. Less than two weeks into robotic milking, the team was down to four hours of required cow fetching every day. Kurt said he is pleased with the continued daily improvement of the process and milk production. In addition to the Lely Astronaut A5s, the Olsons have two Lely Juno automatic feed pushers that maintain consistent feed at the fence for the herd. 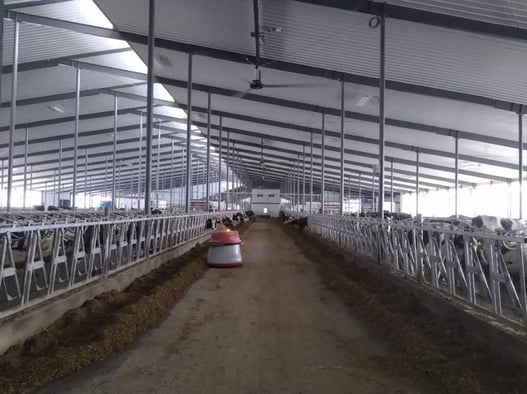 The Olsons are excited to begin utilizing the data that is provided by the robots to improve cow health, milk production and efficiency. Seehafer has been a huge help  and has spent many hours walking the Olsons through the operation and maintenance of the Lely Astronaut A5s. Just a few weeks into robotic milking, the team is already noticing a difference in the herd's demeanor. The cows are less skittish and seem more laid back as a result of the transition to robotic milking. Kurt noted that it was nice to have a few hours in the day where not a single human was required to be in the barn. Before robots, this was nearly impossible when milking in the parlor had to be done 24/7. We are glad to hear of the progress Olson Dairy Farms is already experiencing with Lely automation, and can't wait to hear more.