Malm's Rolling Acres was the very first farm in Wisconsin to operate a Lely Vector automatic feeding system, which was installed in December of 2017. Since start-up, the dairy's team has noticed positive changes in feed efficiency and their herd's welfare.

Want to see Wisconsin's first Lely Vector in action? Join us for the Red Cow Revolution Tour, and you'll have the chance to not only visit Malm's Rolling Acres, but several other dairies throughout America's Dairyland. Click below to sign up! 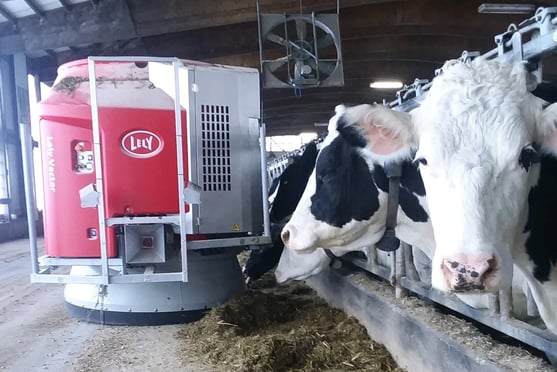 Malm's Rolling Acres was acquired by Bob Malm in the 1980s after farming in Minnesota for nearly 20 years. Today, Bob and his son and grandson, Mitch and Max, work together on the farm. The family owns 900 acres of farmland with approximately 125 milking cows. These three hard-working individuals primarily maintain the operation alone, and turned to dairy robotics to increase the efficiency of their dairy.

The Malms' first dairy automation investment came in the form of two Lely Astronaut A4 robotic milking systems in 2012, which were a few of the first Lely Astronaut A4s in Wisconsin. They chose Lely robots after careful research because there was simply no comparison when it came to product quality. The Malms originally had a tie stall barn, but decided to construct a new facility to build upon their new milking strategy. Before robots, the operation required up to three people for milking, but the Malms now only need one person to manage the milking barn, as each robot has its own individual pen. For nearly eight years, the Malms have been milking with only robots and haven't looked back.

After their success with robotic milking, the team at Malm's Rolling Acres decided to take their operation to the next level in efficiency and expand to automated feeding. In December of 2017, Malm's Rolling Acres became the first dairy in Wisconsin to utilize the Lely Vector automatic feeding system, which was up and running just in time for Christmas. Not only does the Lely Vector feed the milking cows, it also maintains constant feed at the fence for those in the heifer barn. In total, the system sustains approximately 250 cows around the clock, 12 times per day. The Malms appreciate the fact that the Lely Vector allows them to provide a balanced ration to each cow, and has highly reduced feed waste on their operation.

One of the highlights of the dairy is its feed kitchen where the Lely Vector mixes each batch of feed. This room is used for feed storage, selection and loading. It includes the robot's feed grabber and a bunker with 20 spaces that can each hold different types of feed. The grabber is programmed to choose each feed type in a certain order and in specific rations for the optimal feed mix. Looking at the above barn layout, one can see that the Lely Vector must travel between two barns on the operation, which is done by the robot following metal strips as its guide. To better understand how the Lely Vector works, check out this video on our YouTube channel!

Seehafer Refrigeration is the Malms' Lely Center, and has provided unparalleled service. The Malms are appreciative of the fact that the Lely Center's staff is always ready to show up and dig deep into any problem to ensure each robot is running properly. They feel like they have built a partnership with the team at Seehafer, and have learned together.

After becoming an automated dairy, the Malms have certainly noticed a difference in personal flexibility and cow welfare. They are now able to plan chores around when it works for them, which was practically unfeasible before robots. The data they receive from the Lely Astronauts has also helped the team to proactively nurture and improve cow health. The Malms have noticed reduced veterinary costs as a result of the Lely Vector, with a diminished number of hay fever cases in the herd since installation and a significant increase in energy correct milk. Overall, the Malms have noticed happier, calmer cows who have much more freedom as a result of Lely robotic solutions. Lely is excited to hear of the Malms' success with dairy robotic solutions and can't wait for you to visit them during the Red Cow Revolution Tour!