Families of Majestic Crossing Dairy Unite for the Future

In 2011, four experienced farming families joined together to form Majestic Crossing Dairy. Milking more than 2,000 cows in two separate sites — Highland Crossing Dairy and Majestic Meadows Dairy — this partnership has allowed these families to expand and manage a sustainable operation. 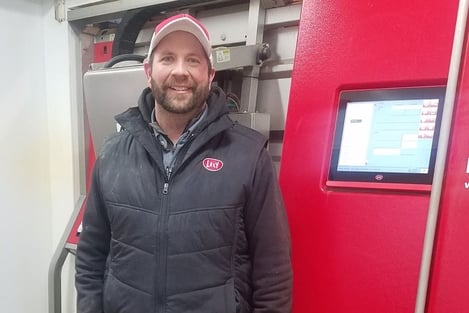 After spending a year planning, construction began in 2017 to house 13 Lely Astronaut robotic milking systems in the dairy's freestall barns. The Lely Astronaut appealed to Darin Strauss of Majestic Crossing Dairy because it gives him the ability to manage cows, not only in groups, but individually as well.

"Why robots? It's the best way to milk cows going forward. It creates the best environment for our cows, where a cow can just be a cow where she's on her own clock," Darin said.

Staff at the dairy have noticed a distinct change in the herd's disposition after the robots were installed. Each cow has a calmer, friendlier demeanor, which ultimately makes them easier to work with. Watch the video below to hear from the staff at Majestic Crossing Dairy.

Transitioning from the milking parlor to robotic milking was fairly easy for the operation and was done in three separate waves. Not only did the cows continue to learn the process, but management knew more of what to expect and adjusted to optimize the second and third waves. The biggest challenge of the first startup was finding the right feed to entice the cows into the milking robot. While many farms choose cow pellets, the staff at Majestic Crossing Dairy utilize a grain mix for their cows. By November of 2017, the entire herd was being milked with Lely Astronauts.

Majestic Crossing Dairy also acquired a Lely Juno automatic feed pusher, which allows for increased feed pushing frequency as well as reduced labor requirements. After utilizing dairy robots for two and a half years, the Majestic Crossing team is happy with the significant cut in labor as well as the increased level of output that wasn't previously seen.

Interested in seeing Majestic Crossing Dairy in person? We have the perfect opportunity for you! The Lely crew is hitting the road for the Red Cow Revolution Tour, and this operation is one of seven top dairies we'll be visiting throughout Wisconsin. Click below to learn more!