Horsens Homestead Farms Turns to Robotic Milking for the Future

Horsens Homestead Farms was established in 1879. It is now owned and operated by Jeff and Connie with their son Ryan. The operation made the switch to Lely dairy robotics in December of 2019.

There's still time to sign up for the Red Cow Revolution Tour! Participants will have the opportunity to see seven Dairy XL operations, including Horsens Homestead Farm. Deadline to register is March 15, 2020. Click below to sign up!

Since its founding, Horsens Homestead Farms has seen considerable growth and change. Jeff started farming with his father in 1983 and finished purchasing the farm in 1993. In 1996, the dairy went from milking 75 cows in a stanchion barn to 160 in a double parlor. In 2013, the Horsens expanded to maximize their existing parlor with a second barn which allowed them to milk 550 cows round the clock. Even with these large expansions, the dairy's team knew they needed further growth and a new method of milking in order to remain sustainable.

The Horsens spent more than two years planning their next steps. They toured several high-producing dairies throughout the Midwest and considered rotary, parlor and robot designs. In the end, they could see that Lely robots offered dairy farmers the highest level of success thanks to increased milk production and proven reliability. Lely's vision of each cow's daily activities being dictated by her own free will was something that stood out to the Horsens. The I-flow concept of the Lely Astronaut robotic milking system was appealing to the Horsens due to its guiding principle of free cow traffic, which gives each cow open access to the robot and encourages even timid cows to enter the box.

When designing a new barn to accommodate the robots, the Horsens worked closely with the team at Abts Lely Center to settle on a layout that involved two robots per pen in an L-shaped design, as can be seen in the image below. Cow comfort was the focus of every aspect of the design, and includes sand bedding and a state-of-the-art ventilation system. The new facility now houses 12 Lely Astronaut A5 robotic milking systems that milk approximately 700 cows, with 500 still being milked in the parlor. The Horsens purchased more than 500 cows for this expansion. The dairy also invested in two Lely Juno automatic feed pushers for consistent feed at the fence.

The transition to robotic milking began on the first Monday of December in 2019 with six Lely Astronaut A5s. The second wave of six robots began a month later in January. Abts Lely Center was a fundamental part of start-up at Horsens Homestead Farm and provided 24/7 assistance for the first five days of the transition. The team at Abts Lely Center was critical during the project design, and the Horsens were very appreciative of their extensive experience with the transition process.

Only a few months into automatic milking, the Horsens are pleased with the performance of the Lely robots. The herd is averaging 3.1 visits per day and the team is excited to see milk production continue to improve with their Lely Astronauts. Despite nearly doubling their herd with this latest expansion, the Horsens did not need to double their staff as a result of robots. They are excited about the atmosphere of their Lely barn, where cows are allowed to do as they please and are very friendly with the farm's workers. We are glad to see the progress Horsens Homestead Farms has made in such a short amount of time and can't wait to visit them on the Red Cow Revolution Tour! 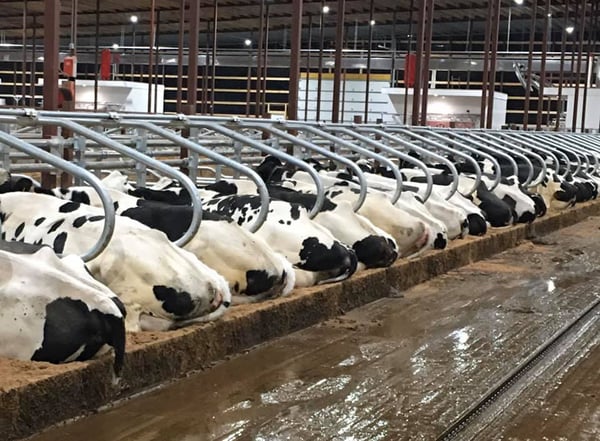