Growing up with robots 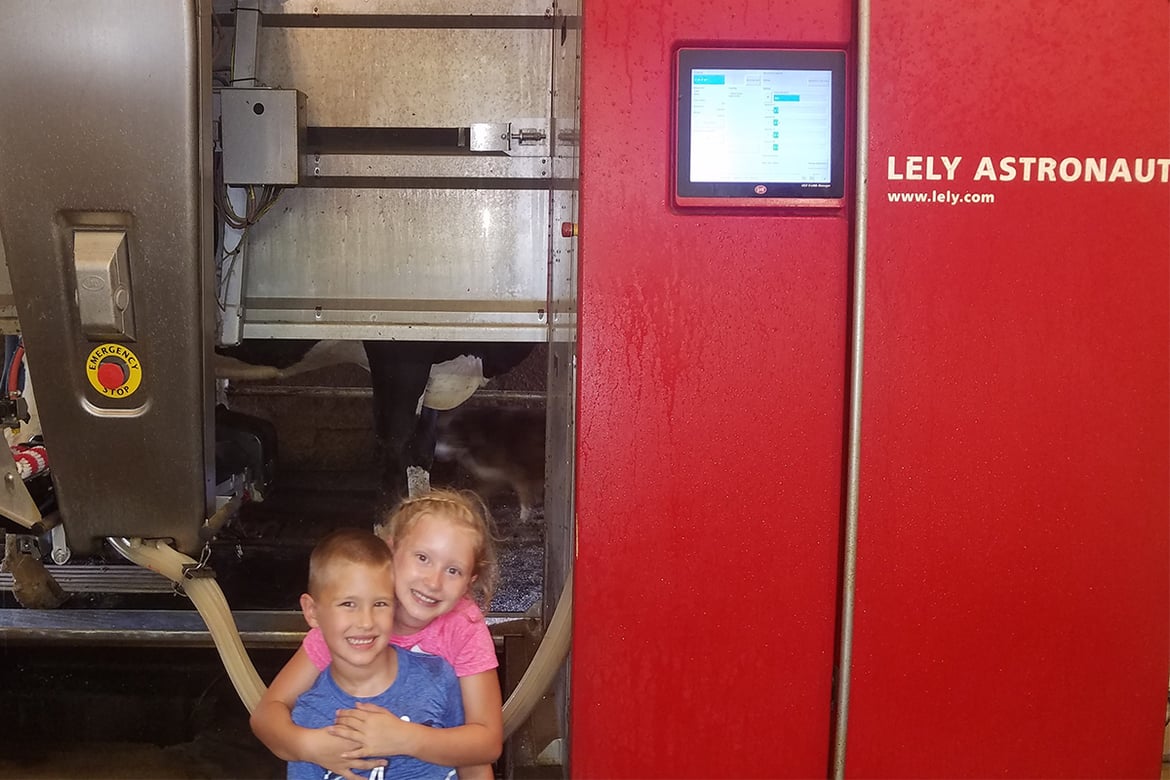 Maggie and Max of Wolff Farms are growing up knowing their parents trust their Lely Astronaut A4 automatic milking system.

Good help is hard to find

With their family expanding, Dave and Bailey Wolff, along with Dave’s parents and co-owners of Wolff Farms, Craig and Nanci, had to start making some decisions about the future they saw for their three-generation farm. During a trip to the World Dairy Expo in Madison, Wisconsin, they saw Lely robots in action, and the wheels began to turn. Motivated by the possibilities they were beginning to see for their own operation, they contacted Arentsen Services, their local Lely Center, and began touring robot farms.

“We saw three or four farms with Lely robots, and the cows just seemed really at ease,” Bailey Wolff said. “Everything seemed to flow smoothly, which isn’t always a given with technology.”

Before Startup: How to Prepare for Milking Robots

Finding the right robot for the job

The Wolffs decided that the Lely Astronaut A4 automatic milking system would offer the best fit for on their 45-cow operation. The free-cow traffic and increased cow comfort greatly appealed to them as the cows would be able to eat, drink, relax and be milked on their own schedule. Designed with a focus on longevity and reliability, the family knew this would be a robot that they could trust.

The Wolff family began their startup in 2014, when their daughter, Maggie, was two and a half years old and son, Max, was just two months old.

“It was a little bit stressful,” Bailey said. “Having plenty of help, having a plan and recognizing which cows would be an issue were keys to our success. We went through a little bit of a trial run before we turned the robots on as well, so that was a game changer. It really wasn’t as bad as I thought and having a smaller herd probably makes it a little bit easier.”

A Future with Dairy Robots

Now five years in, the Wolff family used their extra milk production to pay off their robot by Max’s fourth birthday. Their children have grown up knowing that their parents will be able to attend their Saturday morning games because they are able to trust that their Lely Astronaut A4 will be in the barn, taking care of the herd.

“Our kids love it,” Bailey said. “They love to show it off. Their school brings the 4th grade class out every year to tour the barn, so they get to show it off to their friends and they think it’s pretty cool.”

This stability provided by being able to rely on robots has had a major impact on the family and their farm. Automating the milking process has allowed the Wolff family to better improve their work-life balance. With cow comfort higher than ever, improved herd health and an increase in their milk production, Wolff Farms has embraced the Lely way to dairy.

“Other brands seemed to have some flaws that Lely didn’t, so Lely was our first choice,” said Bailey. “It’s been great ever since.”