Four Cubs Farm of Grantsburg, Wisconsin, was homesteaded by the Petersons in 1877, and has grown considerably since its founding. Gary and Cris, as well as their son Ben, represent the fourth and fifth generations to manage the dairy, and turned to automation in 2018.

We are excited to give you the opportunity to visit Four Cubs Farm in April! This operation is one of seven top dairies we'll be visiting throughout Wisconsin during the Red Cow Revolution Tour, and we'd love to have you join. Click below to sign up!

History of the Operation 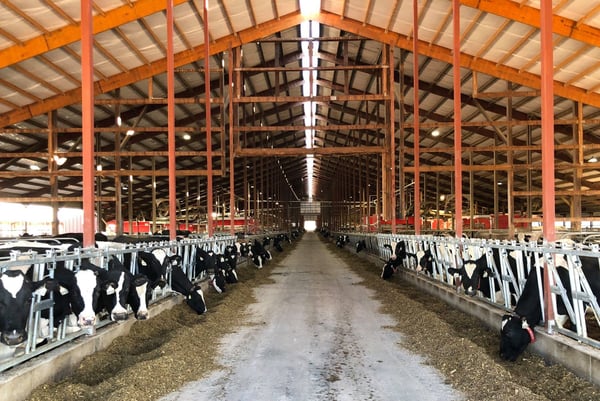 In the past 20 years, Four Cubs Farm has expanded from 45 cows to nearly 1,000 in 2020. They also farm around 2,300 acres that include crops such as corn, soybeans and alfalfa. The Petersons are also involved in many other activities off the farm to promote agriculture. Gary is a member of the Dairy Business Association and has served as the vice president of the Burnett Dairy Cooperative Board of Directors. Cris was the co-chair of the Wisconsin Department of Commerce Dairy 2020 Council and writes award-winning children's books on agriculture. Ben sits on the Wisconsin Milk Marketing Board and is a member of the Wisconsin Agricultural Stewardship Initiative Discovery Farms Advisory Committee.

In November of 2017, the dairy suffered a devastating blow when the Petersons lost their 130-year-old barn and milking parlor in a fire. Without their parlor, the team needed to find a way to milk the cows. Fortunately, neighboring dairies pitched in to help the Petersons during their time of need. The fire was put out around 11 a.m., and by 8 p.m., all 850 cows were dispersed across several local operations to be milked.

The Petersons decided to look at this unfortunate event as an opportunity to become a more sustainable operation for years to come. Even before the fire, the team had been considering dairy automation. Four Cubs Farm's herd manager Nathan Brandt had already begun breeding the cows for uniform teat placement, which is ideal for robotic milking. When going through the dairy robot selection process, Lely stood out to the Petersons because of its emphasis on cleanliness and cow comfort. The fact that the teat cups of the robot don't touch the floor was also an important aspect to the team, who prioritize a sanitary milking process. Fortunately, the main barn was saved from the fire and retrofitting the building for milking robots was able to begin. The image above shows the barn design that was created for the facility. The layout includes eight total pens with two robots apiece in what is called a small L-shaped design.

Lely Center Leedstone was very helpful in assisting the Four Cubs Farm's team during the transition to robotic milking. In February of 2018, the first four robots began with more than 200 cows, and the Leedstone team was there throughout the first few days to assist. Four waves of robot startups occurred during the next several months, until the operation was fully automated with a total of 16 Lely Astronaut A4 robotic milking systems. They also commissioned two Lely Juno automatic feed pushers that provide consistent feed at the fence, which means frequent feed consumption day and night.

What struck Gary the most about the switch to automated milking was the complete change in the herd's disposition. He couldn't believe how much friendlier and content they seemed, and the team now receives frequent affectionate sniffs and licks from the animals. Before robots, the cows were herded a few times a day into the milking parlor, where they would have to wait up to 45 minutes before each milking. Now the cows are allowed to make their own choices, and are a lot more comfortable and agreeable as a result.

The team is also very pleased with the fact they can better monitor each cow individually. Because of the data provided by the Lely Astronaut A4s, they know when each cow is in heat, how a change in feed affects her, her milking frequency and more. This data helps the Four Cubs Farm staff make strategic adjustments to improve overall cow health. The robots have also allowed the Petersons to save on the cost of labor, and only 12 employees are currently required to manage the herd. The Petersons have also seen increased flexibility in their lifestyles, with more opportunities to get away from the farm for other activities. We are excited to hear of the progress and positive impact this farm has experienced as a result of dairy robotics, and are proud to continue to support them with Lely solutions! 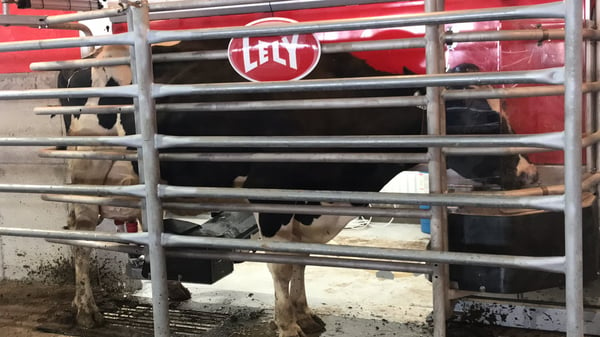