Buit Dairy has been a family-run operation since 1987 when Russ and Judi Buit moved to their current location in Bentley, Alberta. When the couple and their son Brandon decided to upgrade to a new facility, they wanted to choose the solution that would offer them the complete package in milking, feeding and manure management. This led the Buits to painting their barn red with Lely automation. 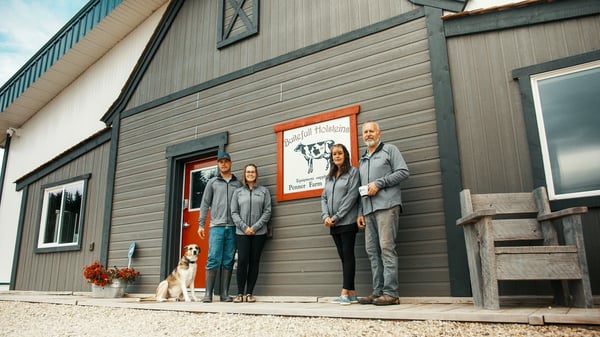 After milking for over three decades with a double-4 herringbone parlor in their dairy's old barn, the Buits knew it was time to make an investment in their farm's future. The family was doing most of the milking themselves, and wanted to find a system that would improve their farm's efficiency and milk production with less labor requirements. Their interest in dairy robotics was first piqued when one of their friends installed a Lely Vector automatic feeding system. This led to their first discussion about automation with Penner Farm Services in 2016, where they learned about Lely's wide variety of solutions.

"The deciding factor in choosing Lely over other brands for us was the Vector feeding system and how it integrated all together as one with the robotic milking. We also wanted to start with the Collectors all at the same time, so everything was all on one system," said Brandon.

Working with Penner Farm Services as well as their nutritionist and vet, the Buits designed a new facility that features a six-row free stall layout (pictured below), with perimeter feeding for their 90 cows. They installed two Lely Astronaut A4 robotic milking systems that are arranged in a head-to-head design, with both robots in one pen. Robotic milking startup began on January 15, 2018, and the process went smoothly with the help of the dairy's local Lely Center. The operation's Lely Vector was installed in March of 2018, and has greatly increased its feeding consistency and accuracy. The Buits, who previously used a skid steer to feed their cows, can now rely on the Lely Vector to take care of it, automatically providing feed when necessary and pushing feed every hour.

The Buits also installed two Lely Discovery 120 Collector mobile barn cleaners that vacuum manure every hour, and have seen a big improvement in overall cow hygiene and health. The robots easily integrated into the daily rhythm of the cows' environment, and the animals are very comfortable with these new members of their herd. Having previously used the skid steer for hauling manure, the robots have considerably freed up the team's time for other tasks. The family has also noticed a distinct improvement in their cows' feet cleanliness, and no longer have to do the weekly hoof baths they did before the installation of the Lely Discovery 120 Collectors.

Buit Dairy has seen many improvements since installing their Lely robots. Having previously produced an average of 34 kg/75 lbs of milk per cow per day in the parlor, the operation is now seeing an average of 41 kg/90 lbs at an average of 3.2 milkings per day. They also went from 3.9% to 4.1% average fat. Brandon is also appreciative of the flexibility he now has in his daily schedule as the result of robots.

"The most appealing aspect of robotic milking is the freedom to be able to do certain things at certain times and not be tied to milking three times a day like we were before. And being able to sneak in 20 to 30 rounds of golf a season," said Brandon. 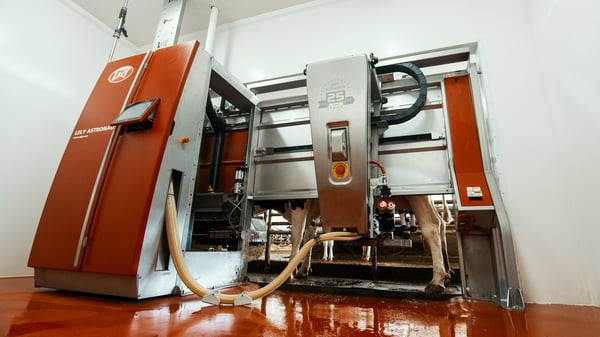 The Lely T4C management system connects all the Buits' robots under one central program and allows them to optimally manage their operation. For example, this program gives them the opportunity to measure the effects that any feeding changes have on milk production based on the data from the Lely Astronaut A4s and Lely Vector. After making the switch to automation, the Buits went from a system where everything was on paper, to having useful data consistently at their fingertips with technology like the Lely T4C InHerd app.

"It's a lot easier to see everything on the computer and on my phone. I can lay in bed at night and check on the cows with my phone. When we leave our farm in Alberta to travel to Florida, I can check on the barn from another country," said Brandon.

Lely North America is proud to support a family of dairy producers who have truly painted their barn red with Lely solutions! Watch the video below to learn more about this innovative dairy:

Future Farming at Your Fingertips