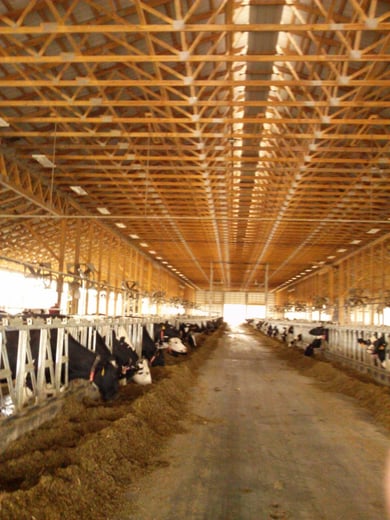 Gloria Hafemeister, writer with Wisconsin State Farmer wrote about SwissLane farm in Alto, MI, which is in its fourth generation of ownership and includes multiple members of the Oesch family. Because they brought so many family members into the business, they are now a large farm with 2,000 Holsteins and numerous accompanying young stock. Read an excerpt below or the entire article here.

Tom Oesch explained the dairy side of things and how they maintain their 29,000 rolling herd average and 120,000 scc average. "Our goal is to be 100 percent registered Holstein," he said. "We believe the industry is moving ahead in leaps and bounds with genomics, and we are participating.

"We have one of the most talented dairy staff in the country. Our success is largely owed to them."

Tom worked as a nutritionist for six years before returning to the farm.

Of the farm's business philosophy, he says, "We want to keep things in-house. We do our own breeding and flushing. We do our own crops. We partner with our local utility to process our manure to turn it into power for 110 homes."

They also do their own calf management to maximize genetic potential. Their calving goal is 22 months, and they have some that freshen at 20 months.

The farm has adapted a centralized calving system, something they gleaned from their many visits to other successful dairies around the country.

Transition cows are all at the robot dairy. Because they stress cow comfort, they utilize sand, but they are always open to other bedding methods, realizing sand is harder on equipment.

He calls the robotic dairy their "dream dairy." It was built in the middle of a field, and everything was designed specifically to work with the robotic system.

"We wanted what was best for the cows," he said.

Since they started milking in the robot barn four years ago, their average daily milk production has gone up by 30 pounds a day, and they have lowered their cull rate by 9 percent. They say that's because it is a single-box robot where the cow chooses when she will get milked.

"It's a philosophical thing," Tom said when asked about why they chose to use eight single boxes instead of a rotary robot system. "We just wanted a system that didn't put any stress on the cows."

Matt Oesch is in charge of the farm's cropping enterprise. They utilize Feed Watch and measure shrink.

They closely monitor the energy-corrected milk and milk income over feed cost, working to build a history.

"Looking at that," he said, "we will notice certain things jump out at us and we can then make good decisions."

When they put up their feed they stress the importance of packing it well. They use inoculants and put an oxygen barrier on top and then a plastic cover.

The family raises corn, alfalfa, soybeans, wheat and sudex on 5,000 acres of land. Of that land, they own 1,780 acres. They also apply their own manure to the crops after it goes through a digester that is owned by their utility.

They use a sand separator, reclaiming 85 percent of their sand for reuse, and are continually working on ways to make that an even better system.