Jim Dickrell, editor of Dairy Today, attended the 2015 Precision Dairy Conference, held in Rochester, Minn. June 24 and 25. He talks about dairy technology he saw or heard about which included Chad Kieffer of Utica, Minn., a dairy producer who says high milk production (100 lb./cow/day), high throughput and good milk quality all can be achieved with robotic milking. Kieffer is a part owner of his family’s 300-cow dairy that has a rolling herd average of 29,000 lb. The Kieffer’s milk with five Lely robots.

Read below or the entire article here.

If you’ve ever gone to buy a new cell phone, the choice of phones, options, apps and calling plans can make your head hurt within minutes of entering any store.

That mind numbing exercise, which I endure every few years with as much enthusiasm as a root canal, gives just a glimpse of what dairy farmers are up against as they search, compare and price new technologies for their farms.

The 2015 Precision Dairy Conference, held in Rochester, Minn. June 24 and 25, was a good reminder of that. The Conference, organized by the University of Minnesota and the University of Kentucky, had about 40 sponsors and venders, displaying products ranging from cow activity monitors to robotic milkers to individual cow methane detectors.

Ten dairy farmers spoke, sharing what they’ve learned as they’ve adopted these new technologies. Since these producer presentations were sponsored by companies whose products the farmers were using, it’s a safe bet the farms were the very best at adopting that particular tech product. Nonetheless, it’s clear these products have moved beyond prototypes and first users to mainstream application: 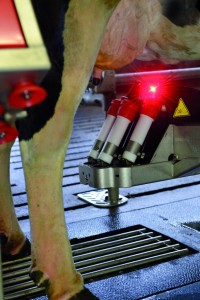 What these examples tell me is that the right technology in the right hands works. Unfortunately, there’s still that deer-in-the-headlights look when sorting through all these options.

Jeff Bewley, an Extension dairy specialist, says you should approach buying dairy technology much like you’d buy your next cell phone. He’s come up with a check list of six questions (read them here) to ask before signing that purchase order. The list won’t make your selection task easy, but it is a place to start.