Richard Banks with www.myfarmlife.com, wrote about Todd and Murray Schnarr of Alma, Ontario, who have converted to Lely automatic milking systems in order to save on labor costs. Read an excerpt of the article below or the entire article and video here. 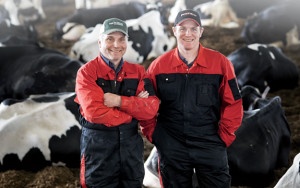 It’s just one of those talks that you have while you’re milking the cows,” says Todd Schnarr. “You know, ‘What do you want to do next?,’” he recalls asking his dad and business partner. “‘Where do you think we’re going?’ As soon as a piece of cows busts off a piece of stabling, it gets you thinking a bit about, well, how long’s this barn going to last and stuff like that.”

The exchange got both Todd and his dad, Murray, talking about things they’d been thinking for some time. To survive in the dairy business, they knew they needed to make adjustments. Not that they were strangers to change, however. For instance, slightly more than a decade before, Murray had asked his son to join the business, and the two Schnarrs doubled the size of their dairy to accommodate 98 cows.

But the changes the two dairymen began to discuss this time around were more revolutionary than evolutionary. More transformational than just a revision of the current model.

At the time, the Schnarrs, who live and work near Alma, Ontario, were working out of a tie-stall barn, and, says Murray, “I’d been milking cows for 40 years and [my knees] just wore out. Last eight or 10 years I had to use a stool just because I couldn’t get up and down as well anymore. I had to do something different.”

In addition, he says, “We were just way too overcrowded. We had to get these cattle moved into an area where they had a lot more freedom, a lot more space and a lot more cow comfort.”

After attending an open house at a neighboring dairy, the Schnarrs found what they hoped would be a solution consisting of two main parts, each working hand in hand with the other. One was a compost-pack barn that would give the cows the freedom to move about inside, which, in turn, would allow them to essentially milk themselves at the second part of this equation: a robotic milking system.

Pioneered in Europe some 20 years ago, significant numbers of dairies in Canada, and more recently the U.S., have begun installing robotics, also referred to as automatic milking systems (AMS). At a cost under $200,000 for a basic AMS, dairy owners hope the payoff will come relatively quickly, mainly in the form of increased yields and lower labor costs.

Todd Schnarr can access a vast array of data on the robotic milker’s monitor, as well as on a computer in his office and his smart phone.

The robotic system the Schnarrs purchased, which includes two milkers, a central pumping and processing unit, feed pusher and calf feeder, cost them about $400,000. Even with a total cost of $1.7 million, including construction of the new compost pack barn, Murray and Todd hope the system will pay for itself in six to seven years from time of completion.

“Reduction of labor cost is basically why we put the system in,” says Todd. He notes, however, that another plus of using less outside labor is that it’s often undependable. “Finding somebody who wants to sweat or wants to do the work, or just show up on time … basically, [it’s difficult to] find reliable hired help.”

As for yield, the road to a promised increase included a fairly steep—albeit, not unexpected—learning curve. It was July 2, 2014, when, says Murray, “we started to teach cows from a tie-stall barn how to work with a robot barn.”

“And then the next few weeks were, I guess you could say, hard,” says Todd. “Very, very hard. We pretty much were out here, I’d say, at least 20 hours a day … in the barn pushing cows and training.”

The first two months in the new facility were made all the more difficult because it was the busiest time of the year for the Schnarrs’ custom hay operation. They were trying to cut and bale hay in what is typically a tight window for such work.

“In the transition period … we went from shipping probably close to 30 to 31 liters per cow per day to, like, 15 to 18,” Todd says. “It was like holy moly. We were anticipating [the yield] to drop. We didn’t think it would be quite that bad.” In two to three weeks, however, the cows “were back in the ballpark of where they needed to be. And then they’ve just steadily gone up from there.”

As of this spring, the Schnarrs’ cows were up to 34 liters per day, and they expect the increases to continue, in large part because the cows can milk themselves when they’re ready, not at times set by their dairy operators. For instance, in the Schnarrs’ old barn, the cows were milked twice a day. The 115 cows in the new setup now visit the robotic milkers an average of 2.6 to 2.7 times per day.