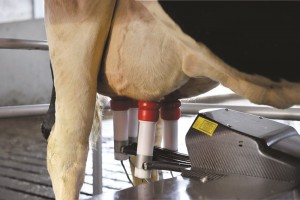 A UW-Madison study of 635 Lely robot farms in North America analyzed over 71,000 observations to find optimal situations for robot herds amongst current owners. The data, paired with farm specifics like breed, geographic location, pen size, and whether or not they were in the Canadian quota system also grouped 529 farms into 11 "clusters" of similar output, allowing future robot owners to estimate what they might expect when building a certain type of robot facility.

Likely the most important result from the findings, presented at Lely's 2015 Farm Management Support conference in Pella, Iowa, was the difference in the long-debated free-flow versus guided-flow traffic in an automatic milking facility. Based on the Lely-only data of 635 farms, the study found 2.4 pounds of milk per cow per day and 148 pounds of milk per robot per day more on farms with free-flow traffic. Lely considers farms to be free-flow only if cows can choose where to go at all times during normal operating procedures; a pre-selection gate would be considered guided-flow.

Other indicators of higher milk per cow/robot per day were a greater number of milkings, faster milking speed, more box time, as well as seasonal differences.

The Lely data found no significant differences between cows milked in brand-new barns versus retrofit facilities over the 4 year study. New barns did demonstrate a great yield increase between years one and two, but after two years the differences diminished.