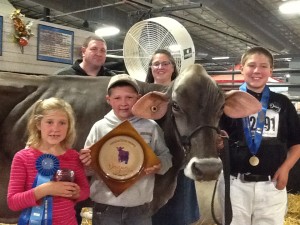 You could see the pride and passion in young stockman Dalton Freeman at this month’s World Dairy Expo, held in Madison, Wisconsin. After all, he took home a first place ribbon and his cow Jonlee Secret Langwathby earned him the Champion 4-year old highest production award in both the junior and open show divisions.

Traveling to the World Dairy Expo is a family tradition. Dalton falls in the footsteps of his 90-year old grandfather. “My mom says grandpa has been coming to Expo forever,” said Dalton. Unfortunately he was unable to make the trip this year, so Dalton was awfully excited to take home his prizes and bragging rights. Taking care of the show cattle and the dairy herd is a family affair. Dalton’s uncle Jeremy assisted the family at Madison, while Monty, Dalton’s dad stayed home to keep an eye on the dairy operation.

The Freeman’s were featured during the 2011 World Dairy Expo as a part of the Virtual Farm Tour series. The family milks their herd with three Lely Astronaut automatic milking systems. “The robots are awesome, that’s how Jonlee is milked at home and how we keep track of her production,” said Dalton.

Congrats to Dalton. Look him up at the 2015 World Dairy Expo to see what he and his siblings bring to the “Dairy in our DNA” event. Dalton’s little brother is chomping at the bit to get his chance to lead a Champion through the ring. Rest assured the future of dairy operations are in great hands and the young competitors will keep coming back to the show ring to carry on the family traditions.